M.A.E.L.T. (2012-2014) is a technology project whose objective was to offer an innovative platform and to experiment with new services using augmented reality technology to promote urban and cultural heritage. The M.A.E.L.T. project has focused on technologies to achieve massively interactive projections. (Associates: Artefacto, Spectaculaires, EESAB, Metalobil. Funded under future investments – call for proposals ‘Technologies of digitization and development of cultural, scientific and educational content’).

Two of the experiences realized with the platform that was developped during the project are The Terrarmonium and The Rendez-vous Place du Parlement.  The plaform allows nearly one hundred users to interact in real-time with their smartphones (with a dedicated iOS/Android application with an interactive webpage).  A small number of processes are used to merge the interaction before forwarding it to the rendering server.

During summer 2013, in front of the Parlement de Rennes, people were invited to experience a massively interactive audio and video installation. With their smartphones, in a period of 10 minutes, up to 110 people simultaneously manipulated the spatialized sounds and visual metaphors projected on the monument. This collective composition proposed by Artefacto, Spectaculaires and EESAB with the J.A.T.A.C. collective.  You can see a second video of this experience, made by Renne, Ville et Metropole by going here.

During summer 2014, in front of the Parlement de Rennes, people were invited to experience a second, massively interactive audio and video installation. With their smartphones, during a period of 10 minutes, people voted for their preferred music style (breizh, rock, groove, or electro) before dancing in Augmented Reality with DJ Anne de Bretagne. During the dance, other people projectoin was animated in real-time. This experience was brought together by Artefacto, Spectaculaires, and EESAB. 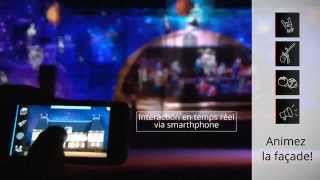 Video made by Artefacto.

Romain Cavagna is mainly working on Augmented Reality and Interactive Projections as a research project leader at Artefacto. He got his PhD in computer science from the Rennes 1 University on content management and quality optimization for 3D contents distribution and during it's postdoctoral research fellow at LIP6 he worked mainly on p2p networks for games. He is also the president of the Ubeek association whose first objective is to gather people and skills around artistic and digital projects.
More by Romain Cavagna

Red Bull Art of Can

A synesthesia installation : Zeek ALL

Projection During the Inauguration of Artefacto’s New Building