Projections in a Cave with Zedd & National Geographic

Projections in a Cave with Zedd & National Geographic

“Shooting the video for “One Strange Rock” was such an insane experience. The National Geographic team had projected videos onto the cave walls that made me feel like I was in another world…” – Zedd

By setting up projectors within an artificial cave in the Hollywood Hills, Zedd’s music comes to life in a unique projected AR performance. Footage from One Strange Rock is projected onto rock and stone, giving the performance a holographic-esque vibe.

Just a day after filming the video, Zedd sits down in the recording studio of his former L.A. home to explain his music-writing process. This time, he’s minus a baby grand, flanked instead by a keyboard and massive computer monitor. 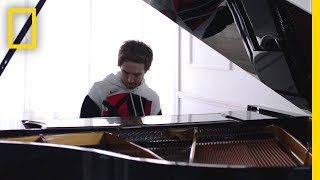 “I like to start with the harmony and the melody. I record it all with Midi and bring it into my computer. And there’s several stages of adding little bits and pieces samples drums shakers experiment you go through kicks, until you hear that one that you think is right and then you manipulate that when you slowly build your song structure and you mix it all together and then you bounce out one little file that’s what people listen to” 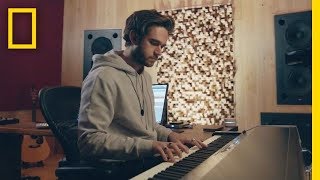 In the Studio Pt. 2 ft Zedd | One Strange Rock

“To me, it’s about the evolution of the song. The first time you hear the real chords, it’s so exciting. I really feel like the song needs to be listened to start to finish. I don’t have a favorite moment because it’s the whole evolution that makes it so exciting to me.”